PP has been kind enough to release the artwork for all of the new non-character warjacks being released in Warmachine: Vengeance. Without further ado, behold the new Khador warjack, the Grolar! 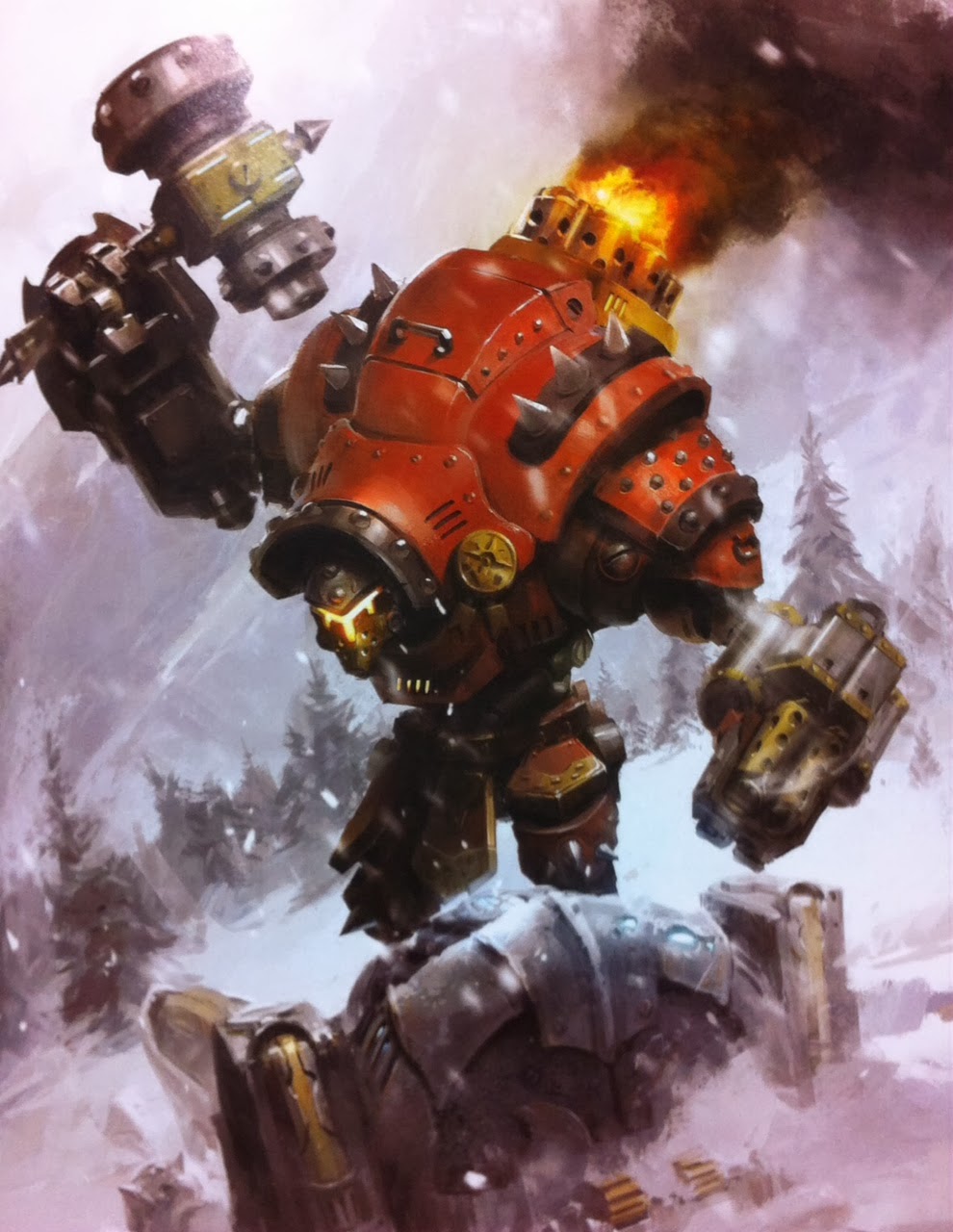 First off, some education: a "grolar" (real world term, not nerd game hijinks this time) is apparently a cross-breed between a polar bear in a grizzly bear. I'm not sure which is more terrifying - the fact that is a thing in the first place, or that there are enough of those in the world that they need a word for it.

Next, the art itself: I think it's pretty cool. For a faction based partly off of WWII-era Russia, it's slightly surprising that there aren't more hammers in Khador so it's neat to see one on a warjack. The gun on the left arm is interesting; if I hadn't heard any spoilers about it, I'd be all over the place in terms of guessing what it is. I do like that it has a gun, and a different looking gun than what Khador is used to (it's apparently designed in a similar fashion to Torch's lil-flamethrower.)

Also, I respect PP's creative license, but given how bad the current Kodiak is at dealing with enemy heavies, I'm skeptical about how this variant managed to kill that Convergence vector. I think it's just posing over the body after some IFP took it down.

When I originally sat down to write this post, I was going to discuss the current set of spoilers and what I thought about them. It's a good thing I didn't because just a little while ago the fine folks over at Bell of Lost Souls posted up spoilers for all the remaining things we don't know in the book. Unfortunately, that's just Butcher3's theme list and the rules for the Grolar (no 6th release) but at least now there are some rules to mull over!

I'm still sorting out how I feel about this new warjack.

On one hand: I was really hoping for a more generally useful gun, since Khador's warjack shooting options are kind of janky. I was also really hoping for something that slotted into the 8 PC bracket, because that's a pretty dead area in terms of Khador's warjack stable (Drago's great but I only use him with Vlad, and the Kodiak was rendered mostly obsolete when colossals came out.)

I'm also a little disappointed in how Fleet works out in terms of damage output in a turn. It's a bit of a devil's deal: you can pay 1 Focus to get that extra range, but that's one less Focus you can use on attacks or boosts.

And damn if that gun doesn't have some sad stats. Short range, mediocre POW, bad base RAT to start with. Not at all a thrilling stat line for that gun.

On the other hand: I damn sure wasn't expecting three initial attacks, which makes any kind of math adjustment that much more effective (especially if I'm off in guessing the Open Fist at P+S 15.) It's also difficult to understate just how useful guaranteed knockdown is as a rule on a melee weapon, and it combines a little bit of pushing around as a bonus. I also was only expecting P+S 17 max on the "main" weapon, so P+S 18 is great (in this modern meta it feels like the minimum required to really get work done.)

It's also hard to hate on the Auto Cannon when it seems like it's basically a bonus gun, or if you look at it like a very odd third melee weapon. ROF 5 is a very impressive potential output of attacks, so if you have any way to make those shots more accurate or hit harder, it's a gun that could do a fair amount of work - spitballing: if you could Kiss and Rust Bomb a warjack, it'd be eating 5 POW 16 shots.

And then there is the simple combo of getting the Grolar to something that relies on DEF like a warcaster or warlock, hammer it in the head, then either dump hammer hits into it (vs. warcasters and their higher ARM) or unload Auto Cannon shots into it (vs. warlocks and their pool of transfers.) With no outside help the Grolar has a 9.5" threat range on that attack run, and with any outside movement buffs it can close quite a gap.

My gut reaction: it's not the warjack I was hoping for, but I think the devs did a good job of coming up with a warjack that is unique enough that I'll consider it in some lists. If nothing else I have a spot in my case that is open since I retired the Kodiak.

As for 'caster combos and synergies, Marth provides a very good breakdown in this post on his blog. It's based on earlier spoilers, but those spoilers ended up being mostly accurate, so I think the thoughts are still very relevant.

Out of all the possible combos, I think the Vlads (with an emphasis on Vlad1,) Sorscha1, Strakov, Harkevich, and Zerkova are the most likely to like having a Grolar around. I can also see value in Butcher1 or Butcher2 (if played out of theme.) By far the biggest value is going to be using the Grolar as a Malakov target: Redline kicks the Grolar's damage up to very respectable levels, helps to offset (and enhance) the use of Fleet, the Grolar has a gun so it can afford to not commit right away, and Malakov can easily give the Grolar the 3 Focus it wants before going to work.

It'll be interesting to see what people manage to come up with when using the Grolar. It'll be proxies for the foreseeable future (no sign of it on the release list up through May,) but I can see a Grolar or two ending up in a lot of Khador collections. Quite possibly mine.

Email ThisBlogThis!Share to TwitterShare to FacebookShare to Pinterest
Labels: Warmachine