Snowpiercer is a movie that reminded me why we all pan for gold in the "now available" section of any given streaming video service: sometimes you find a nugget, and once in a rare while you'll find a vein. 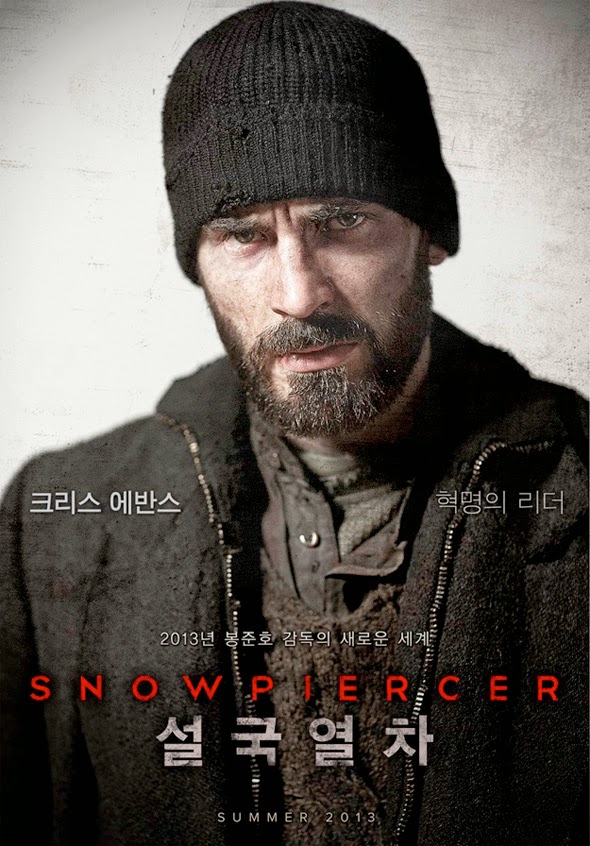 My wife and I were browsing through the movies available on Xbox video a week or so ago, hoping to find something interesting. We noticed the promo image for Snowpiercer and that it starred Chris Evans (of Captain America/Avengers fame) and immediately dismissed the movie as a "boat payment" movie - a low quality cash-in movie that stars often show up in between major releases. They're usually easily identifiable based on three criteria: 1) you haven't heard of it before that moment, 2) the premise is super soundbyte worthy, and 3) the title is either totally on the nose, or very dumb. Based on a quick glance, Snowpiercer fit all the criteria.

But there was one thing we couldn't ignore: despite it looking like a million other cash-in star vehicle movies, Snowpiercer boasted a 94% "Fresh" rating on Rotten Tomatoes (as of this posting.) I often treat ratings with skepticism, but ratings at the extreme high or low ends usually get my attention. Something often needs to be actually legit good or bad to hit high-highs or low-lows, and this being a movie with zero hype/buzz (which usually confounds getting a legit reading from ratings) made me even more curious.

This past weekend saw us with some spare time Saturday evening, so we decided to roll the dice and rent it. At best, we'd see a good movie; at worst, we'd have spent less than what it would have cost us to see it at the movies.

Turns out, I'd have happily paid full ticket prices - Snowpiercer is one of the best movies I've watched this year.

Snowpiercer tells the story of humanity on the brink of extinction following a man-made catastrophe. Unlike many post-apocalyptic stories, the premise for this ELE is relatively novel: in an attempt to curb global warming, mankind distributes an experimental substance in the atmosphere in 2014. Instead of creating a perfectly temperate climate, the experiment backfires horribly, ushering in a snap ice age. Unable to adapt or adequately prepare, almost all life on earth is wiped out.

The only survivors of this catastrophe are those lucky enough to be on the Snowpiercer, a train designed by an eccentric man named Wilford to endure the new ice age, provide for those on board, and run indefinitely on a globe spanning track. The survivors are divided between those who purchased passage prior to world's end and those who fled onto the train as refugees. Those who paid passage live comfortable lives at the front of the train, while the refugees at the end of the train receive the bare minimums necessary to survive.

This developed caste system has resulted in several rebellions, but none of those rebellions has resulted in any improvement or change for those living in the rear of the train. Snowpiercer begins in the year 2031, 17 years after the end of the world. Another rebellion is brewing, and a refugee named Curtis (played by Chris Evans) is working to make sure this revolt is more successful than those in the past. His goal: make it to the engine and confront Wilford himself.

I'm reluctant to say much else for fear of spoiling the experience. Snowpiercer is a movie that is probably best experienced with as little lead-in as possible. Despite the confined setting the movie gives you a lot to take in and process, so giving away any of that beforehand feels like it robs some of the experience. I was going to toss a few stills from the movie in this write-up, but I don't even want to go that far; even though they're spoiler-free in the traditional sense, it's still a little bit of a spoiler for the feel of the movie, which deserves to be experienced as a whole.

What I can say is that the movie benefits tremendously from the performance of the actors. Chris Evans and Kang-ho Song play off each other fantastically as the leads of the movie, while John Hurt, Tilda Swinton, Jamie Bell, Octavia Spencer, Ewen Bremner, and Ah-sung Ko give excellent performances as their supporting characters. There's one more excellent performance, but since that was a surprise for me (and a very pleasant one,) I'll leave that one a mystery; you'll know it when you see it.

Even the tertiary cast does an excellent job, and some of those characters don't even get lines! Two of the most remarkable characters in the movie are totally silent, and their ultimate interaction is one of the most chilling of the film.

Snowpiercer also benefits tremendously from the vision of it's director. Joon-ho Bong (Mother, The Host) brings a very different take on this story than what you'd expect from a more typical Hollywood rendition of the story. It's kind of hard to describe, but I'll give it a shot:

A story like this one has very specific beats, and a pattern to those beats that makes it recognizable. We've all seen the core of this movie many times before - man vs. system, usually represented by another man because symbolism is hard - and so one comes into a movie like this with expectations of how it'll play out.

From my experience, in a general sense, that usually means the following: strong first act (everything is new and shiny,) second act bolstered by action, third act flaccidly concludes the story (since the end of the story was inevitable from the beginning.) The movie ends with a general feeling of wellness ("yay, we beat the system!") but little else.

Joon-ho Bong was able to, with what I'm assuming is the help of Kelly Masterson (screenplay co-credit), construct a story that follows the same path we're used to, but it uses different beats; sometimes a different rhythm entirely. Much of the tension from the story comes from the setting, the circumstances, versus the direct conflict of "man vs. system" that usually fuels this kind of movie. Or, more accurately: the movie is able to make "the system" tangible as something other than a personification (eg. Agent Smith in The Matrix) so you as the viewer are more accurately able to identify with the feelings that being in that system would generate.

In a movie like this, action sequences are often used to break up the tension, to give the heroes (and by proxy, the viewer) a sense of accomplishment/victory, and often to move the story along in lieu of other storytelling methods (punches and explosions are way more fun to watch than conversations.) Please note: this isn't a value judgement - I love The Matrix, which follows this formula to the letter - but a recognition of how Hollywood style direction and writing usually approach this type of movie.

Snowpiercer handles the action sequences very differently: none of the action sequences are particularly cathartic/relieving (point of fact several of them serve to ratchet up the overall tension of the story with no release,) the violence isn't stylish or stylized (or shown much at all, except in ways that elicit the trauma of what's happening/happened,) and there isn't much action at all. I can see why this movie would be hard to market: while there are action sequences, this damn sure isn't an action movie, but it's also more active and "action-y" than a slow musing drama on an ice train.

What that results in is a movie that follows the typical pattern of a movie of this type, but it varies up what happens at each step just enough to keep it interesting. Snowpiercer had it's hooks in me from very early on, and I was watching intently all the way up to the final shot.

Granted, the movie isn't without it's flaws. The science behind the world ending phenomenon and humanity's savior-train are both best not thought about too hard. This movie definitely isn't hard sci-fi.

The theme is also about as unsubtle as a...well a train. You could probably guess the main theme just from the premise, and the script damn well doesn't let you miss out on it. It didn't strike me as particularly hackneyed or offensive but it definitely wasn't something you need to think too hard about. That's not to say it's a "dumb" movie - quite the contrary, I'm still mulling over aspects of it now after watching it a few days ago - more that they damn well wanted to make sure you didn't miss the main point.

All of those feel like nitpicks though. I've given movies heartier recommendations that were way more flawed than Snowpiercer, so don't let any of the downsides dissuade you.

Snowpiercer is one of the best movies I've seen this year, and it's actually comparing pretty favorably to some of my all time favorites. I can see coming back to this movie a number of times to reexamine and re-experience it, and it's crazy to think that I stumbled upon it almost totally at random.

Cheesy ending line: don't be left out in the cold. Find a way to catch Snowpiercer sometime soon. You won't regret it, and this movie deserves more hype and recognition than I've seen it get so far.
Posted by Moondog at 11:01 AM

Email ThisBlogThis!Share to TwitterShare to FacebookShare to Pinterest
Labels: Movies