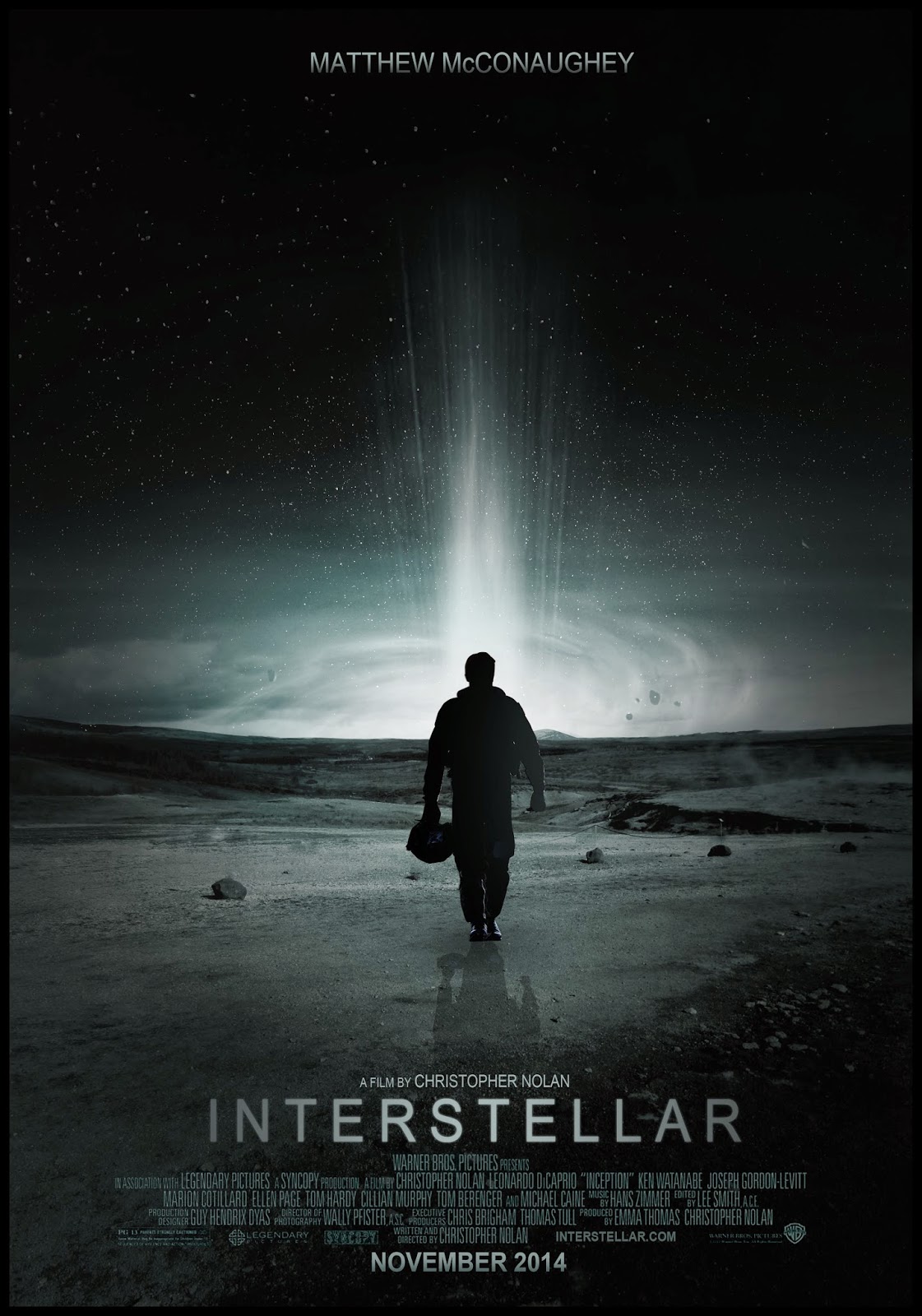 After having a week or so to digest Interstellar, my feelings are the same as after I first watched it: its a pretty good sci-fi movie, with awesome visuals, a fantastic soundtrack, and some fun (at least for me) concepts that it plays around with.

It tries a little too hard in places, but overall this movie is Nolan in fine form: a strong narrative voice, clear themes, and very impressive cinematography. More in-depth and spoiler-y thoughts after the break.

One last thing before venturing into spoiler territory: we saw this movie in IMAX, and I think it did make a difference. The already impressive visuals of some of the space travel sequences were astonishing on that huge screen, and the sound was used very effectively to pull you into the experience. The biggest downside is that the movie ends up being so damn loud in places that I walked out feeling half-deaf, but that aside it felt like money well spent.

There are two big things that keep coming to my mind whenever I think about Interstellar.

The first is how surprised I was by how well the movie fit its running time. I inwardly groaned when I saw that Interstellar clocks in at 2 hours and 50 minutes of screen time; even the best movies of that length tend to drag in places which leaves me with mixed feelings and a lack of desire to revisit it later.

Looking back on Interstellar, I feel like it mostly made good use of that monstrous screen time. The movie has plenty of slow moments, but I think that's precisely what makes it not feel like a drag. Many movies peak towards the middle, with a spike again towards the end to wake everyone up and let them leave the theater on an up note.

Interstellar doesn't quite flow like that. The whole movie is kind of a slow roll up to the big twist/reveal at the end of it, so you don't have that middle-of-the-movie-pop that can make the last third feel like kind of a drag.

To illustrate the point more directly, if a graph of a regular movie's use of tension and excitement looks something like this: 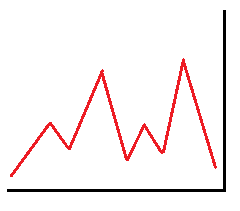 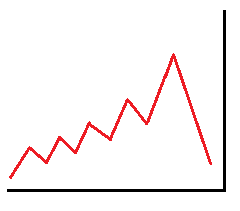 The result is a movie that is almost three hours long, but doesn't feel like it. And it doesn't really register the same feeling of "that was great, but x kind of killed the pace" I usually walk away with (especially when watching longer movies.)

The other thing that I keep coming back to with Interstellar is how the way the ending is handled makes me feel like Christopher Nolan was a bit bothered by how moviegoers responded to Inception. Semi-spoilers for that movie incoming.

Inception is a bit of a heady movie with a straightforward pitch. It's easy enough to follow along with the core plot of the movie without trying to wrangle all of the little things going on behind the scenes, so most people can belt themselves in and ride it all the way to the end. Then the final scene comes and they're hit in the face with an ambiguous, open ending.

I'd imagine the reaction was less than positive. Especially as theaters were likely filled with fans brought in based on the promise of more goodness from the guy who brought them Batman Begins and The Dark Knight - two movies that are relatively deep and nuanced Batman movies, but are also still pretty straightforward in terms of narrative and plotting.

Inception was, based on my recollection, a well received movie, but I don't think it garnered the reaction Nolan was looking for. I think Nolan expected Inception to generate more discussion about reality and how we perceive it, especially in the wake of all the discussion brought about by The Dark Knight, but it seemed like most people just said "That was a neat movie" and moved on. Without Batman to keep people hooked, people just left Cobb and his top behind as a neat but weird experience.

I think that lack of recognition bothered Nolan, who probably didn't want his greatest legacy to be a set of really good Batman movies. So when it came time to deliver on Interstellar, he made damn sure that most of the key points of the movie are delivered with all of the subtlety of a sledgehammer.

It's not significantly to the detriment of the film, but it is a shame. Some of the elements of the film would have been much more effective with a lighter touch. A few examples:

The Power of Love. This idea is hackneyed and hard to swallow in general, but I can live with that. It is harder to do so, however, when characters almost literally use that phrase to describe their intuition. The absolute worst moment is at the climax of the film, which is unfortunate.

Matt Damon. His character has relatively little screen time, but a distressing percentage of it is him repeating his primary character motivations over and over, in fairly explicit terms. Just to make sure you understand why his character is being such a goddamn nutjob. I'm all for explaining your character's motivation, but Matt Damon's character feels like it was either clumsily written, or more subtly written initially but revamped to be much easier to understand.

The Big Twist. This is the one that feels most like someone involved in the production of the movie getting nervous about audience understanding and nudging the writers to spell it out a little more clearly. Given that the ending of the movie involves 4th dimensional space and time, I can't blame them for dumbing it down a bit.

What is not, however, alright is to have your characters state the facts of the big revelation in the most precise, literal, holding-your-hand way possible. I don't feel that the twist was all that hard to piece together regardless, as the scene gives you tons of evidence and time to put it all together. To follow that with something like three exchanges that "clarify" what happened at the climax of the movie reeks of someone having absolutely zero faith in the audience's ability to put two and two together and not get cheesesteak.

Again though, none of that sinks the movie. They're kind of bothersome moments, but thankfully for as on the nose as they are it's more (in my opinion unnecessary) repetition than it is burning up swathes of screen time.

And it's certainly not enough to take away from the movie's high points. Interstellar hits all the notes you want it to: excellent performance from the cast (including the remarkable achievement of making two robots standout characters,) stunning visuals, an absolutely fantastic, on-point soundtrack, and interesting cinematography. You can feel the amount of work that went into this movie at every step.

The last thing I'll say about Interstellar is that I appreciate how sci-fi it is. Or rather, that it veers closer to "hard" sci-fi (though there's plenty of shaky science in the movie) than "soft" sci-fi. Everything in the movie is rooted in some scientific explanation (give or take The Power of Love, but maybe they thought up one for that too,) and everything ultimately boils down to how well we as humans understand our universe and the rules that govern it. It was very refreshing watching an entire movie about humans in space that didn't incorporate some variant of space magic, aliens, or unexplained cosmic forces. Not that there's anything wrong with those, I just didn't want them in this movie.

Overall, the more I think about Interstellar, the more I like it. It missteps in a few places, but those are relatively minor, and those missteps are far outweighed by how well it tells the tremendous story it sets out to. There's an undeniably high level of craft and passion throughout the movie that makes it an amazing experience the first time you sit through it, and there's enough meat on the bone (though I don't think it's as deep as something like Inception) that it's worth revisiting a few times. And it's probably the closest we're going to come to a "hard" sci-fi movie out of modern Hollywood.

For all those reasons, I'd recommend Interstellar to any sci-fi fan, and it's also worth considering if you're a big fan of any of the main cast members - with the added bonus that everyone in this movie does a fantastic job. This is one of those few movies that is probably legitimately enhanced by seeing it in theaters, and it's also one of the few that's probably worth springing for IMAX tickets if you have a decent theater nearby.
Posted by Moondog at 4:45 PM

Email ThisBlogThis!Share to TwitterShare to FacebookShare to Pinterest
Labels: Movies